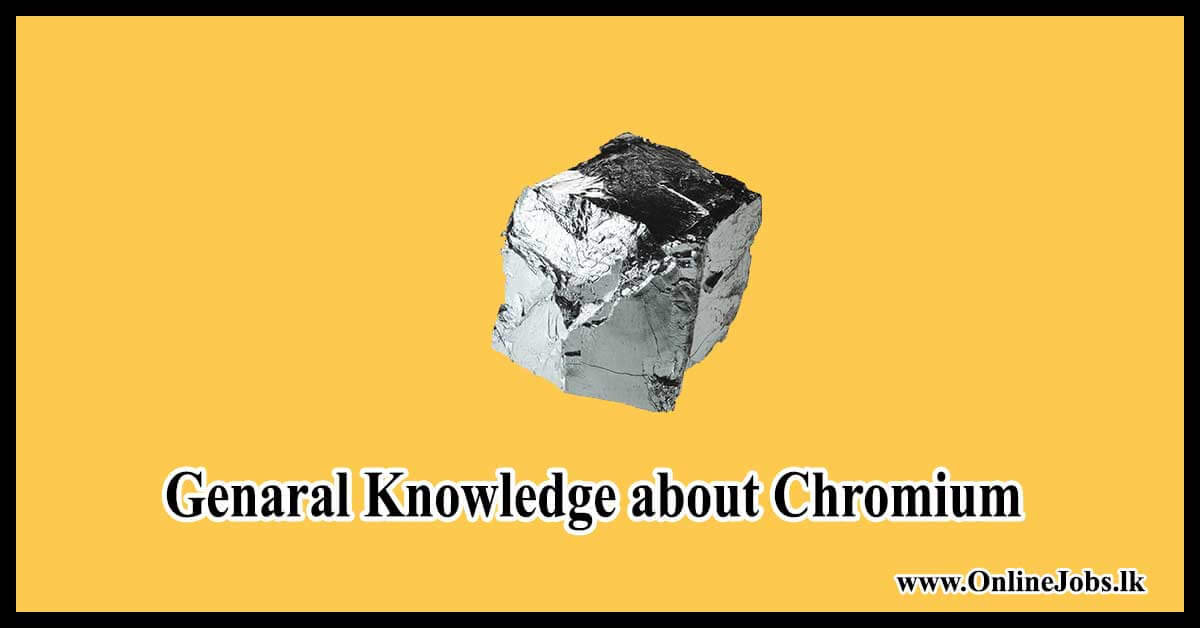 General Knowledge about Chromium  – Few of the elements that occur in nature are unique as they are derived from their natural resemblance. There is one element which is derived due to its distinguished colour. The element is Chromium. Chromium is the first chemical element in Group 6 with a symbol Cr and an atomic number 24. It is a steel–grey, lustrous metal and is the 21st most abundant element in the earth’s crust. It is a rare element and is obtained by mining the mineral Chromite. Native Chromium exists in Kimberlite pipe, where the reducing atmosphere favours the formation of diamond in addition to the elemental Chromium. Chromium derives its name from the Greek word ‘chroma’ that means ‘colour’. This is because most of its compounds are intensely coloured. As it is hard and brittle, it takes a high polish, resists tarnishing and has a high melting point.

How was Chromium discovered?

Prior to its discovery, the French chemist Nicholas Louis Vauquelin was intrigued by a bright red mineral that had been discovered in a Siberian gold mine in 1766 and was referred to as Siberian red lead. It is now a lead form of Chromate and is known as crocoite. His analysis confirmed it as a lead mineral. He isolated Chromium by dissolving it in acid, precipitating it, filtering it and focusing his attention on the remaining liquor. He discovered Chromium in 1798 and named it so due to its range of colours in the solution.

Where is Chromium found? (Genaral Knowledge about Chromium)

What are its characteristics?

The common properties of Chromium are:

Chromium is composed of three naturally occurring stable isotopes namely 52Cr, 53Cr and 54Cr. Out of these, 52Cr is the most abundant; its natural abundance being 83.78%. Also about 19 radioisotopes have been characterized; the most stable among them being 50Cr with a half–life of 1.8×1017 years and 51Cr with a half–life of 27.7 days. All the remaining isotopes have half–lives less than 24 hours. The isotopic contents of Chromium are typically combined with manganese isotopic contents and have been found in the application of the isotope geology.

What are its uses and applications?

Some of the common uses of Chromium include:

What are its effects on health?

As Chromium is an essential nutrient for humans, its shortage in the body may cause heart conditions, disruptions of metabolisms and diabetes. However, too much uptake may cause skin rashes or even death. Some of the health problems caused by Chromium include upset stomach and ulcers, respiratory problems, weakened immune system, kidney and liver damage, alteration of genetic material, lung cancer and death. Inhalation of the Chromium compounds may lead to ulceration and perforation of the mucous membranes of the nasal septum, irritation of the pharynx and larynx, asthmatic bronchitis, bronchospasms and edema. On the other hand, respiratory symptoms include coughing and wheezing, shortness of breath and nasal itch.