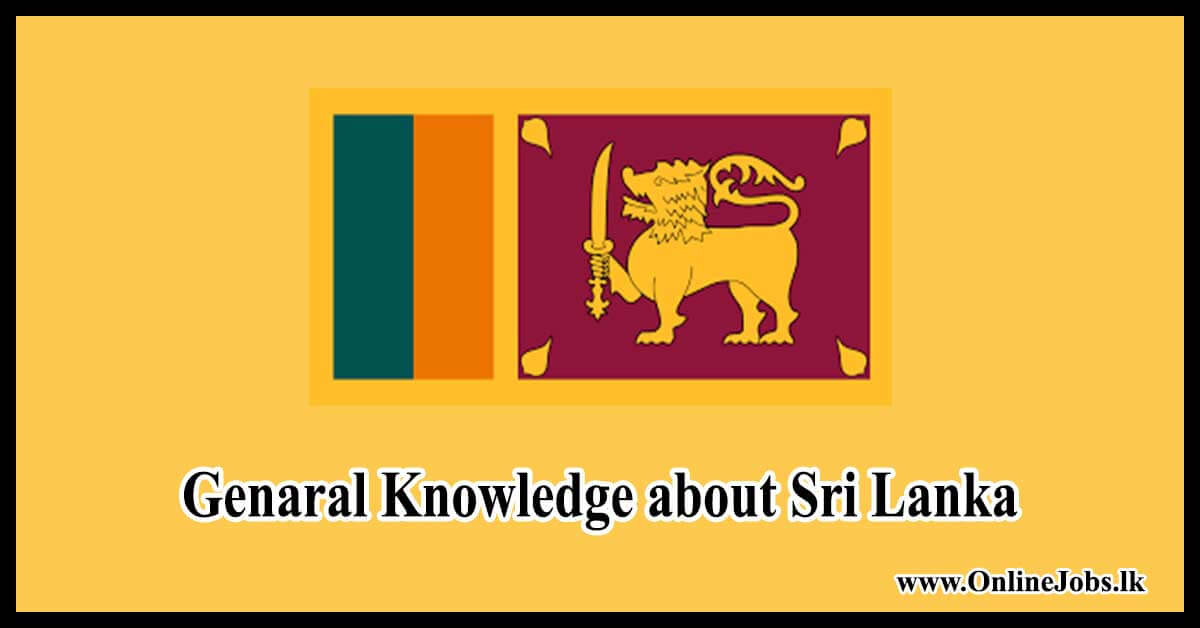 General Knowledge about Sri Lanka – Sri Lanka or Democratic Socialist Republic of Sri Lanka as it is officially known, is an island country situated in the azure waters of the Indian Ocean. Sri Lanka shares its maritime borders with Maldives to the southwest and India to the northwest. Sri Lanka was known as ‘Ceylon’ until the year 1972. In the Language of majority, Sri means ‘blessed’ and Lanka is the name of the island. Sri Jayawardenapura Kotte is the capital of Sri Lanka. Colombo is the commercial, executive, judicial capital and the largest city of Sri Lanka.

How are the climatic conditions in Sri Lanka? (Genaral Knowledge about Sri Lanka)

Sri Lanka experiences tropical type of climate, with two dry and two wet seasons. The average annual temperature in Sri Lanka lies between 27­° C to 29° C. The temperature in the highland areas is low as compared to the other parts of the island. The coastal and the highland areas perceive cool mountain and sea breezes throughout the year. The monsoon season is between May to September in the south and the western regions of the country and October to April in the North and Eastern regions of the country. The regional differences in the amount of rainfall and its variability have formed the distinction in Sri Lanka between a Dry Zone and a Wet Zone. Due to these factors the coastal areas and the beaches get enough sunny days and dry weather even during the night as it rains only for a few hours in the night.

Which are the religions that are followed in Sri Lanka?

The population of Sri Lanka practices a variety of religion. The major religion in Sri Lanka is ‘Theravada Buddhism’, with about 70% of the total population as its followers, with a significant minority of Hinduism, Islam and Christianity followed by the people in the country. The Hindu’s and the Sri Lankan Buddhist’s share a number of similar beliefs and rituals. Each of the four major religions are served by their native religious leader. There are many sacred sites and temples built in the country like Tooth Relic of Buddha, Anuradhapura and Polonnaruwa.

How is the education system in Sri Lanka?

Presently, there are about 10,390 government schools in Sri Lanka that offer the curriculum which is approved by the Ministry Of Education. Education is compulsory and free for children from 5 years to 13 years of age. Education is financed by the state and is offered free at all levels, including the university level. Textbooks are provided to all by the government. The current literacy rate of the country stands at 97%. Tamil, English and Sinhala are the medium of language in schools and English is also taught as a second language. The education structure is basically divided into five parts: primary, junior secondary, senior secondary, collegiate and tertiary. Besides the government schools, there are 33 private schools that provide free education and offer the local and the British syllabus system. There are about 15 national universities and 7 postgraduate institutes in Sri Lanka. Some of the known include University of Colombo, Open University of Sri Lanka, University of Sri Jayewardenepura, Post Graduate Institute of Agriculture, Post Graduate Institute of Medicine and Post Graduate Institute of English.

Which are the unique species of animal found in Sri Lanka?

Sri Lanka lies in the Indo-Malaya Eco zone, despite it being small in size it is one of 25 bio-diversity hotspot in the world. Sri Lanka has high proportion of flora and fauna as it has 24 wildlife reserves. Unique mammals to Sri Lanka are the Red Slender Loris, the Toque Macaque, the Purple-Faced Langur, Spotted Mouse Deer and endemic species like the Ohiya Rat and Shrew. Sri Lanka is inhabited by 250 bird species, some of the unique ones include Wood-pigeon, Hanging-parrot, grey Hornbill, Bush warbler, Yellow-eared Bulbul, Whistling thrush and the national bird Jungle fowl. There are endemic reptile species like the Pied Worm Snake, Sri Lankan Pit Viper, Hump-nosed Viper, Krait and the Sri Lankan Flapshell Turtle.